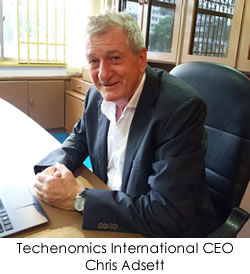 300% improvement over competitor’s product
A live demonstration carried out by Techenomics at Mining Indonesia has clearly shown the superiority of NanoLub tungsten disulphide (WS2) additives over other so-called nano additives.

Using a Timken test on Shell Helix 15W40 engine oil, adding 3% of the WS2 additive showed a 300% improvement on time to failure over a competitor’s non-tungsten additive.

The result prompted Techenomics’ CEO Chris Adsett to say, “If you think you are getting results from using another additive, then you need to talk to Techenomics about the superior results you will achieve using NanoLub WS2 additives.”

The Timken tests were carried out last week by Techenomics’ technology and product development manager Eka Karmila at the company’s stand at Mining Indonesia. 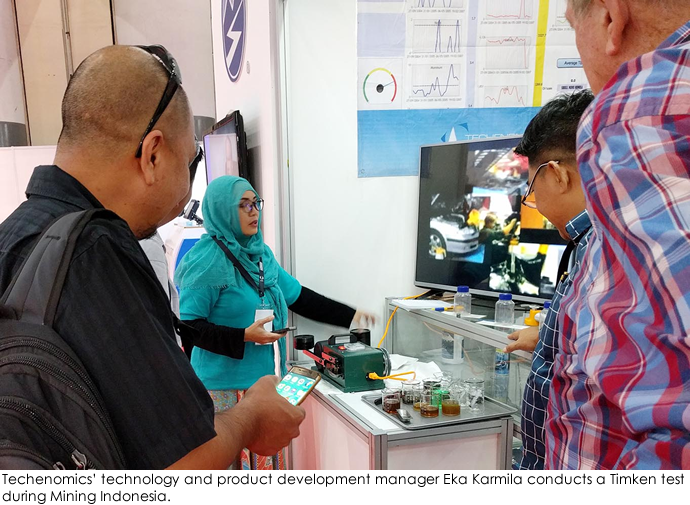 A base test was conducted on the engine oil with no additive and this was then compared with results of tests with 3% NanoLub WS2 additive and with 3% of the competitor’s additive.

Eka Karmila said the WS2 additive showed a 61.8% improvement in time to failure over the base test and 300% improvement over the competitor’s product.

Chris Adsett said the test results were astounding. “We even had to increase the weight on the Timken test machine when using the WS2 additive to 5kg, up from 3.75kg on the other tests just to get a failure time.

“The fact the competitor’s so-called nano additive didn’t even do as well as the base test with no additive was amazing.”

Techenomics is distributing the NanoLub WS2 additives throughout its network and is conducting a series of independent tests on the product, which have been developed by US-based company NIS.

The tests in Techenomics’ laboratories have demonstrated the benefits of the WS2 product on a range of engine oils, gear oils and transmission oils.

Chris Adsett says the NanoLub technology has been demonstrated to work with a wide range of oil and fluids in a variety of environments and in various operations.

“The WS2 technology adds value to the fluid management and condition monitoring services we provide at Techenomics and benefits clients by providing better performance and longer life from their lubricating oils and fluids.”

September 20, 2017 by techsingapore in WS2 additives